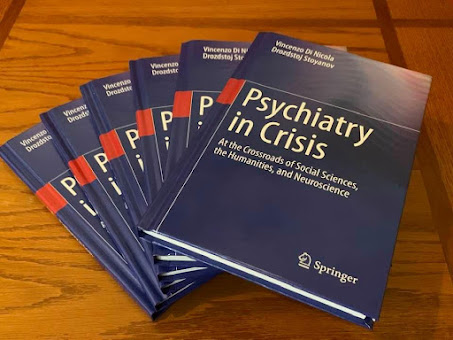 My copies of my new book with co-author Drozdstoj Stoyanov just arrived!

At the Crossroads of Social Sciences, the Humanities, and Neuroscience

Posted by Vincenzo Di Nicola at 9:17 PM No comments:

And here is our second advance review and blurb:

“Psychiatry in Crisis: At the Crossroads of Social Science, The Humanities, and Neuroscience is a pioneering search for the discovery and rediscovery of psychiatry’s roots. By presenting an analysis of the current capturing of psychiatry by its tributary sub-fields, Di Nicola and Stoyanov offer philosophical options including ontology. This, in my opinion, is of great hope for a new beginning for psychiatrists of different clinical and theoretical orientations and for the well-being of our patients. Drawing on luminaries of philosophy, like Wittgenstein, Althusser, and Badiou, the authors analyze options for the future of psychiatry as a holistic constructive field. This book is a must read for all of us if the field is to develop and flourish.”

Posted by Vincenzo Di Nicola at 6:46 PM No comments:

And here is our first advance review and blurb:
"Psychiatry in Crisis offers an exciting review of present conflicts, discrepancies, and developmental opportunities in contemporary psychiatry – highly reflected and profoundly addressing hermeneutical approaches as well. The book’s authors also point to the impact of the psychiatrists’ temperament, irrespective of the approach they prefer. So, it is an also person-centered endeavor provided to the readers. The book convincingly identifies what is missing at present: a common ground able to root the different branches within psychiatry in an internally homogenous concept of biopsychosocial interaction. Here, the authors and I share a focus, addressing a task to be done for the field of psychiatry.”
– Thomas Fröhlich, MD, PhD
Vice President of the European Society for Person Centered Healthcare, Western Europe
Posted by Vincenzo Di Nicola at 9:34 PM No comments:

From the Foreword, "Beyond Single Message Methodologies"
"[I]n their remarkable book, Vincenzo Di Nicola and Drozdstoj Stoyanov bring ... a refreshingly open and innovative vision to bear on the challenges facing contemporary psychiatry. They are perhaps uniquely well placed to do this. Both are pre-eminent academics in psychiatry. Yet both draw on extensive clinical experience on the front line of care. Both furthermore have been active in the emerging interdisciplinary field of philosophy and psychiatry.
"Their debt to philosophy is clear. Neatly avoiding the trap of premature closure on yet another single message mythology, their thesis is presented in the form of a critical dialogue between two philosophically framed perspectives. Stoyanov casts the crisis in psychiatry in epistemological terms as a crisis of knowledge. Di Nicola by contrast casts it ontologically as a crisis of being. The counterpoint between these two perspectives makes for an inspiring and deeply illuminating read with the added bonus of the introduction of (for many Anglo-Saxon readers at least) fresh names. Di Nicola for example draws deeply on the work of the French philosopher and contemporary of the perhaps better-known Michel Foucault, Alain Badiou, notably on his analysis of what it is to be a human being.
"In drawing in this way on philosophical sources Di Nicola and Stoyanov are themselves exemplars of an important if minority development in contemporary psychiatry. The 1990s as they describe was hailed in psychiatry as the ‘decade of the brain’, the decade in which the neurosciences were set to emerge as the dominant influence on the field under their banner ‘the mind is the brain’. But the 1990s was also the decade of the mind, the decade in which, somewhat to the surprise of many, a long-standing if minority tradition of cross-disciplinary work between philosophy and psychiatry sprang into new life. Di Nicola’s and Stoyanov’s Psychiatry in Crisis reflects many of the virtues of the ‘new’ philosophy and psychiatry. Besides its evident scholarship and originality, and an ethos of mutual respect between protagonists, it is overtly and inclusively international in perspective."
- KWM ((Bill) Fulford, Emeritus Professor of Psychiatry and Professor of Philosophy; Fellow, St Catherine's College, Oxford, UK
Posted by Vincenzo Di Nicola at 9:30 PM No comments:

From the Afterword, "Saving Psychiatry"
"This book provides a wonderful corrective to the reductionisms that bedevil and divide psychiatry. It is beautifully written, well organized, deeply felt, and carefully thought out – a thinking person’s guide to combining the psychiatric arts with the psychiatric sciences. I especially like the way it digs beneath the surface to explore the epistemological foundations of the most important questions facing our field today.
"Will the book’s important bridge-building message have the readership and influence it deserves? I certainly hope so, but must admit to doubts. More than almost any other endeavor, psychiatry is cursed by wars among stubborn true believers – true believer medication types vs true believer anti-medication types; diagnostic enthusiasts vs diagnostic nihilists; biological reductionists vs psychosocial reductionists; and psychotherapists who are rigid, true believers of one particular school and implacable antagonists to all others.
"The people who most need this book are probably too stuck in their trenches to ever read or fully understand it. But for those of open mind and heart, Psychiatry in Crisis provides precious insights that enrich understanding and promote more effective practice."
- Allen Frances, Past Chair and Emeritus Professor of Psychiatry, Duke University, Durham, NC, USA; Former Chair of APA's DSM-IV
Posted by Vincenzo Di Nicola at 9:26 PM No comments:

AT THE CROSSROADS OF SOCIAL SCIENCES,

THE HUMANITIES, AND NEUROSCIENCE

The field of academic psychiatry is in crisis, everywhere. It is not merely a health crisis of resource scarcity or distribution, competing claims and practice models, or level of development from one country to another, but a deeper, more fundamental crisis about the very definition and the theoretical basis of psychiatry. The kinds of questions that represent this crisis include whether psychiatry is a social science (like psychology or anthropology), whether it is better understood as part of the humanities (like philosophy, history, and literature), or if the future of psychiatry is best assured as a branch of medicine (based on genetics and neuroscience)? In fact, the question often debated since the beginning of modern psychiatry concerns the biomedical model so that part of psychiatry’s perpetual self-questioning is to what extent it is or is not a branch of medicine. This unique and bold volume offers a representative and critical survey of the history of modern psychiatry with deeply informed transdisciplinary readings of the literature and practices of the field by two professors of psychiatry who are active in practice and engaged in research and have dual training in scientific psychiatry and philosophy. In alternating chapters presenting contrasting arguments for the future of psychiatry, the two authors conclude with a dialogue between them to flesh out the theoretical, research, and practical implications of psychiatry’s current crisis, outlining areas of divergence, consensus, and fruitful collaborations to revision psychiatry today. The volume is scrupulously documented but written in accessible language with capsule summaries of key areas of theory, research, and practice for the student and practitioner alike in the social and human sciences and in medicine, psychiatry, and the neurosciences.
https://www.springer.com/gp/book/9783030551391
Posted by Vincenzo Di Nicola at 9:19 PM No comments:

The Coronavirus Epidemic as a Modern Morality Play